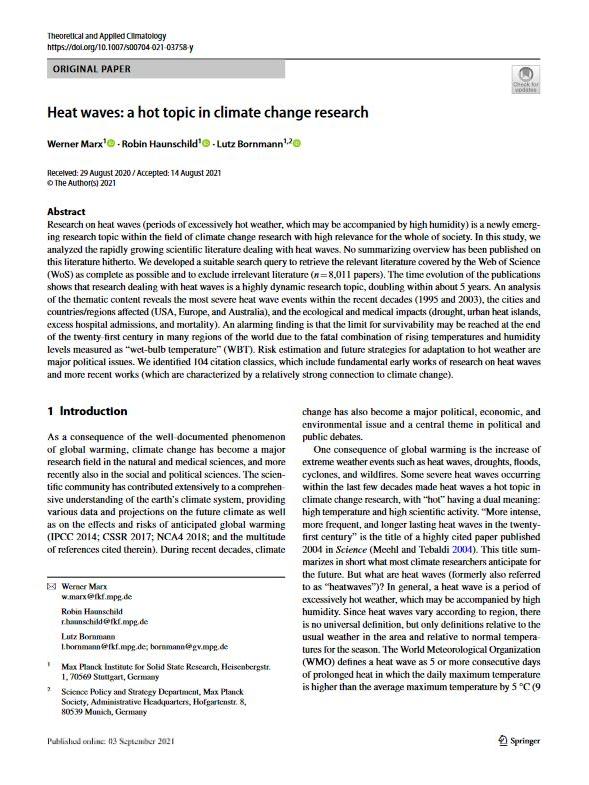 Climate scientists have confirmed that fossil fuel emissions have made the latest, longest and most intense marine heat wave on record. The heat wave swept across the Bering Sea in Alaska and the waters off northern Australia, where abnormally hot water triggered the most destructive mass coral-bleaching event on record on the Great Barrier Reef. Scientists said that human-caused emissions made the recent waves more frequent and intense. These extreme events are a direct result of climate change.

The severity of extreme heat and the frequency of heat waves are dependent on the level of societal vulnerability, access to cooling equipment, and household-level adaptive capacity. The Climate Signals project director, Rose Andreatta, has over a decade of experience translating scientific information to the public. She earned her Master of Public Administration in Environmental Science and Policy from Columbia University and a Certificate of Achievement in Weather Forecasting from Pennsylvania State University.

The 2003 European Heat Wave is thought to have killed nearly 70,000 people. It is estimated that human influence doubled the risk. In 2010, the heat wave in Russia killed 56,000 people. A study from the University of Bern in Switzerland found that climate change made the 2003 summer heat wave in Europe twice as severe. In Paris, the heat wave melted the largest amount of ice in its history, and the number of people killed was 70 percent higher than before.

Recent studies have found that global warming has doubled the chance of extreme heat waves since the 1950s. It has also been linked to the formation of “heat domes” – regions of the Earth that trap hot air. Thus, June-July 2021 heat waves would not have occurred if the world hadn’t undergone human-caused climate change. If these heat domes continue to grow, the threat of future heat waves could be enormous.

In the US, the risk of severe heat waves will rise over the next decade. Many regions are already experiencing high temperatures, but heat waves can be deadly in cooler areas. For example, many cities will become 20 degrees warmer than their surrounding regions. This is known as the urban heat island effect. On top of that, heat waves can last up to five days, but can even be longer if a high-pressure system blocks the weather system.

Researchers at Princeton University have warned that the world will experience more severe heat waves in the future. They found that global warming would increase the frequency of heat waves, as well as the length of time between them. Global warming could cause 83 million more deaths, or the equivalent of Germany’s entire population. The more extreme heat waves become, the more vulnerable the human population will be. So, the sooner we begin to address climate change and reduce greenhouse gas emissions, the better.

The effects of climate change are becoming increasingly apparent. Some regions, like South Asia, have already experienced a heat wave. Others, such as the Middle East, will experience heatwaves with increasing intensity. In India, projections indicate that by the year 2030, two hundred million people could die from heat-related illnesses. This makes the impact of climate change on health a major concern. If we don’t address this issue now, we will be in for a long summer.